There is always a chance of survival- for example, there are some people from the 1945 Hiroshima blast still alive today...one contributing reason is they ate a lot of seaweed which absorbs radiation. It contains a substance called Algin which binds heavy metals meaning even though the seaweed itself is radioactive, it doesn't release radiation into the body, it collects it and takes it out of the body. Bio-virus attacks can also be fought under the right conditions. Unfortunately, most people in the modern world have created enviroments inside their bodies that grow pathogens like crazy due to their diet and lifestyle. That's why I created my channel "TheHealthyLife.com" to help educate people how to better protect themselves as much as possible from pathogenic attacks which happen every day without us even knowing it. Here are some videos I did on radiation survivors https://youtu.be/nobQQ_XjiPw cancer survivors https://youtu.be/AdMeSR0RiHc and other testimonials https://youtu.be/yaF0oIAT3NU and www.MarkusTestimonials.com Here are links to over 85 ebooks I have written on almost any health condition www.MarkusEbooks.com. Bottom line- your best protection starts with YOU first!

Health Consultant to the Military

I was flown in to be health consultant to the military but not just any part of the military- WMD first responders! The 9th CST is a branch of the National Guard that is called in when there is any kind of terrorist attack within the United States- biological, chemical, nuclear or radiological. These are the guys that go in with special vehicles (mobile labs have all kinds of high tech equipment) and heavy bio-suits w oxygen tanks. These military guys don't kill- they SAVE. That's obviously me standing 4th from the left.

There is always a chance of survival- for example, there are some people from the 1945 Hiroshima blast still alive today...one contributing reason is they ate a lot of seaweed (even though the seaweed was also radioactive) Seaweed contains a substance called Algin which binds heavy metals and carries it out of the body, so even though the seaweed itself was radioactive, it doesn't release any heavy metals, only absorbs it and takes it out of the body. Bio-virus attacks can also be fought under the right conditions, for example if the body is heavily oxygenated and pathogens are not fed by glucose or common sugars found in most modern foods. Of course this makes most people prime fuel sources for pathogens, but that's what education is for, which is the purpose of TheHealthyLife.com

The whole experience was right out of a movie- I had a military escort from the airport in a blacked out Suburban with police lights- way cool. Once en-route after picking me up at the airport, the driver radioed in "we have the package" (I was "the package"!) Arriving at what looked like a secret military base somewhere in California, I was greeted by Major William Lee and the whole company. Considering these guys all had intense medical training and had mobile labs with high tech testing and analysis equipment, it was an honor to be called in to teach and inspire them. Definitely an experience to remember. I was even awarded a medalion for my contribution. 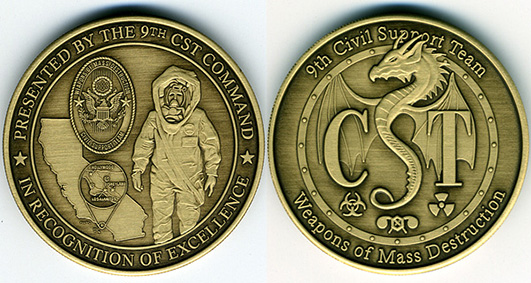 Maj. William Lee and me

The medallion I was awarded